This doll (Busy-Baby Ride-a-Bike) was released in two varieties; with and without batteries.  This page focuses on the battery operated doll.  It uses a single "C" battery.  Information on the recently obtained tricycle can be found here.  Bikey was marketed by Deluxe Reading, which is also Pedigree.

My sister was so intrigued with the multiple Bikey mystery and the non-locatable bike/trike, that she purchased two of the battery powered Bikeys on eBay.  She now has a total of 3.  I've taken a group photo of the Bikey sisters and undertaken the repair of the two non-operational battery powered Bikeys.

This is a patent for another doll capable of riding a bike, Mattel's Tippee-Toes:  US Patent 3514897
After weeks of searching for any information on Bikey's mode of transportation, we finally hit pay dirt the morning after the Bikey rebuilds!  Someone posted a Bikey and her tricycle on eBay!  The pictures below are screenshots taken from the eBay posting.  The tricycle is missing a pedal and the rear wheels reportedly fall off.  Unfortunately, there are no pictures of the back of the tricycle to see what it looks like.  It does appear that the tricycle just moves in a straight line.  Bikey's stirrup straps keep her feet on the pedals. 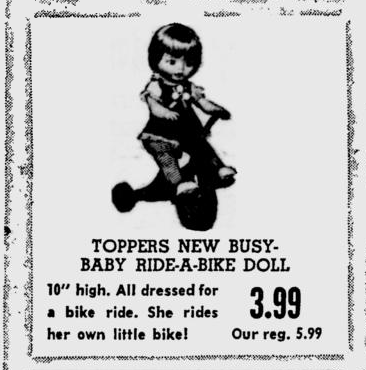 Here is an ad that ran in a newspaper in October of 1969.