Construction toys like blocks, Lincoln Logs, Ringos, and Erector Sets were a big part of creative play for me.  We hardly ever used Tinkey Toys and Legos weren't even on my radar.

Blocks is my generic term for anything that could be stacked - from formed plastic shapes to wooden pieces.  I loved building with blocks from a young age.  My first goal was to go for height.  Watching them topple was both exciting and an opportunity to rebuild. Later I became more interested in symmetry and aesthetics and developed an interest in architecture.  Wooden blocks were the most versatile, we often worked them into the storylines of our imaginary play with stuffed animals and cars by building corrals, houses, and roads.

Gilbert Erector sets have been around since the early 1900's and have gone through many iterations.  Erector sets are now a product of Meccano.

I don't remember what age I was when I first started playing with my older brother's Erector set.  He probably received it as a gift in the mid to late 1950's.  I have no memory of him using it.  I remember it came in an all metal case and had a picture of an excited boy painted on the lid.  The instruction manual was full of awesome feats of engineering - like elevators, carnival rides, rockets, and robots that any boy could assemble using metal parts, a small electric motor, and a miniature screwdriver and wrench.  It was like being handed the sci-fi fantasy world of Tom Swift in a box.  It was with almost reverential awe that the case would be unlatched, a project selected from the manual, and construction initiated on a weekend morning.  Usually a model would be constructed on Saturday morning, paraded in front of dutifully appreciative parents and siblings on Saturday afternoon and disassembled on Sunday.  I can vividly remember both the unique tangy metallic smell of the perforated pieces and the numbness in my fingertips from threading sharp miniature nuts and bolts together.  I particularly loved the models that had moving pieces - gears, cranks, chains, and pulleys.  I don't know what it was about the line art blueprints and exploded view drawings but they made a one function model look like it could do a thousand things.  The whirring and banging noises of a final product rolling across a tile basement floor never seemed to match the awesomeness of the drawings but that could be written off to my assembly skills and not to a discrepancy between vision and reality.

I recently visited my mother. She had been reading my entries for this site and went up into the attic to magically retrieve my brother's Erector Set. I must have grinned from ear-to-ear as a thousand memories came rushing back. My father told me that he had an Erector set as a boy in the 1930's. He said that it was NO. 4. 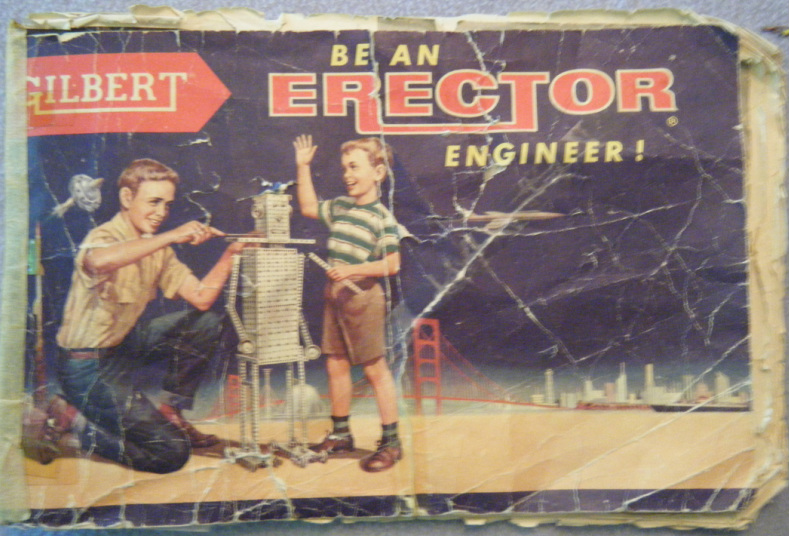 The illustration on the cover of the instruction manual captures the limitless possibilities of science and engineering. This book was well used! 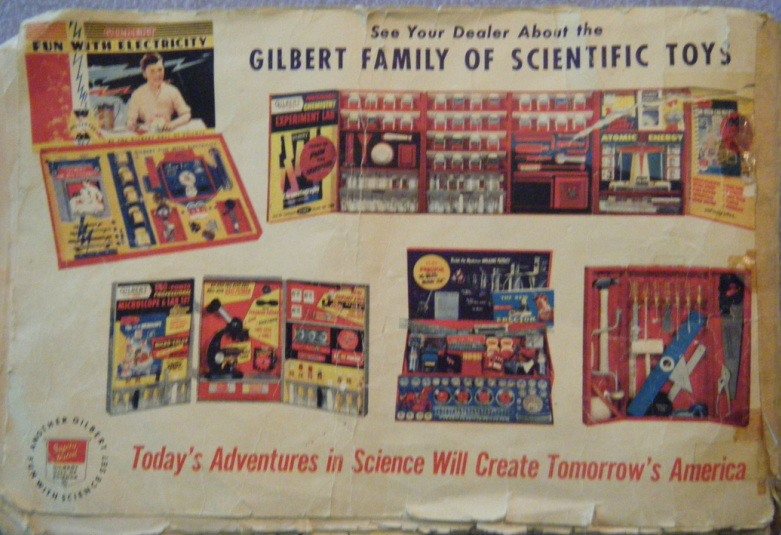 The back cover made me want to get every single one of Gilbert's Scientific Toys.
Eventually, my parents realized this was a lasting passion and gave me a set of my very own in the mid to late 1960's.  Mine came in a red plastic case and included a larger variety of multi-colored parts and plastic wheels.  The motor was larger, more powerful (in my mind) and came with a built in set of driven shafts.  I built most of the models in the instruction book and many that were not.  Over time, my siblings and I cannibalized pieces from the set to build other things and stripped the axle shafts of the plastic wheels from repeated use.  I still have the incomplete set.  I tried sharing the love of Erector with my own children but they preferred Lego snap together construction kits which seemed to spark their imaginations in the way Erector sparked mine.

Ringos are a goofy little construction toy that my grandmother gave to me and my younger brother.  They include only two pieces: rings and connectors.  My mother still has them squirreled away in her toy room in case any grandchildren want to play with them.  Only my brother and I were able to unlock their true potential... 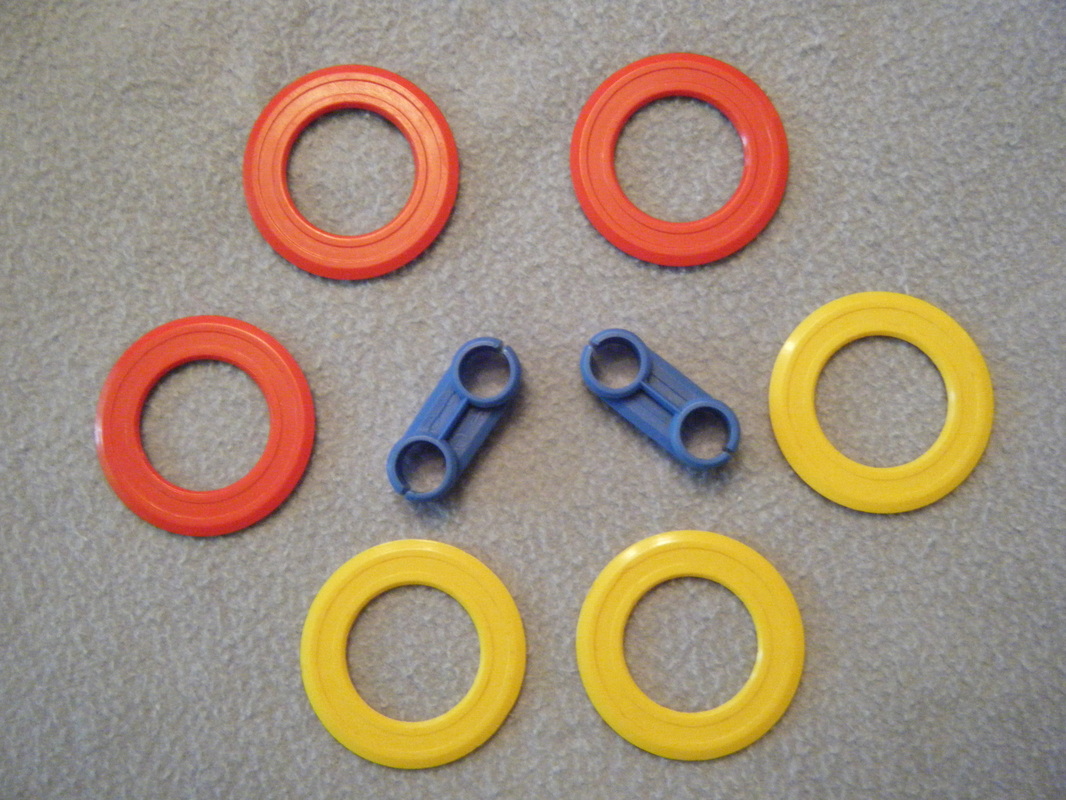 The Ringo set contained nothing but red rings, yellow rings, and blue connectors. 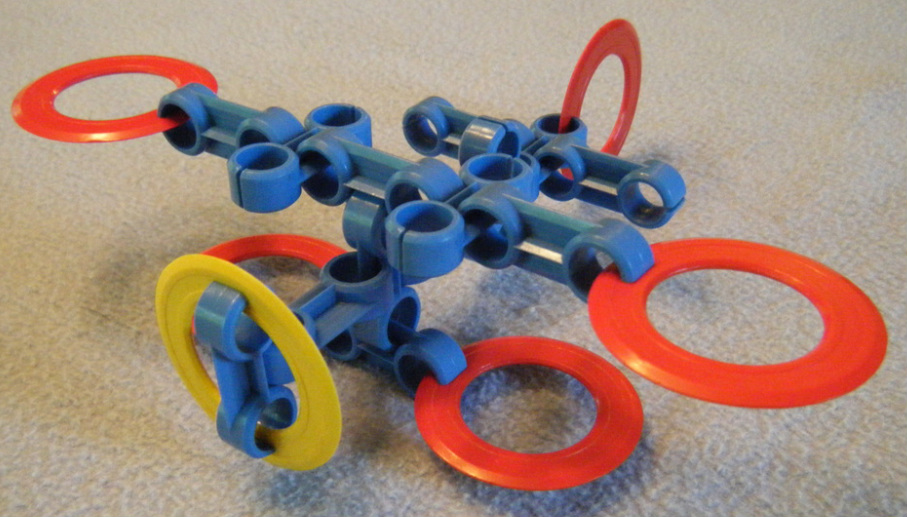 My brother and I used to build squadrons of biplanes out of Ringos. My planes used red rings and his used yellow rings. We would have dogfights crashing the models together to see which plane would survive. Any plane that survived 5 crashes intact was considered an "Ace". I built so many of these planes that when my mother handed the box of Ringos to me forty years later I was able to build the plane from memory instantly. I also used to build what I called a Model T but it was really more like Henry Ford's quadricycle.