Dy-Dee is an Effanbee doll produced from 1933 through at least the 1950's.  During that time period it was produced from various materials.  Some consider it to be the first practical drinking and wetting doll because of its hard rubber head.  Composition doll heads would be damaged or destroyed by exposure to liquids.  It was advertised as "The Almost Human Doll".  Tonner made a reproduction using modern materials in 2004.

This particular doll has nothing wrong with it other than normal aging.  It is included on this site because it has a story; a story that shows the impact that toys can have on our lives.  My eldest sister received this doll as a gift after my second eldest sister was born in 1956.  My eldest sister was three and half years old at the time. The doll was named after the second sister.  My sister has cherished and displayed this doll her whole life.  In addition to the doll connecting her to her sister, the doll is special to my eldest sister because it connects her to our mother and both grandmothers as well.  My maternal grandmother purchased the doll at a Hudsons department store in downtown Detroit.  The doll came with a diaper, a T-shirt, and a bottle.  My paternal grandmother crocheted a beautiful outfit for the doll that matched the outfit she crocheted for my second sister.  My mother used a McCall's pattern set  to sew clothes for the doll.  Many of the outfits she sewed by hand or went to her mother's house to use her sewing machine as she did not have one of her own.  My sister would dress her baby doll, put her in her baby carriage, and stroll up and down the block with our mother pushing our sister in her carriage.

Update
After conferring with our mother we found out that she owned a Dy-Dee doll when she was a girl.  She believes that she received it for Christmas in 1935.  She named her doll "Jane" and she was a composition doll with molded hair.  Her aunt made all the clothes for Jane.  My mother believes that her aunt was such a skilled seamstress that she took measurements from the doll and came up with her own patterns.
Dy-Dee Doll
Carrying Case
Many Dy-Dee doll's came with layettes - which could be combination bed and trunks filled with high quality manufacturer's clothing and baby care supplies.  My sister's doll did not come with one so she adapted another case for that purpose.
Clothing
Today, collectors are most often interested in finding the clothing that manufacturers included with the doll.  However, many of the original owners have special, and fond, memories of homemade clothing.  The owner may have made the clothing herself but in many cases the clothing was sewn by older sisters, mothers, aunts, or grandmothers.  Handmade clothing could mirror the prints and styles worn by the doll's owner.  Clothing would be given on special occasions, such as birthdays, Christmas, and Easter.  Custom embroidery, lacework, crocheting, and knitting harkens back to an era when needlework was both an essential skill and an art form. 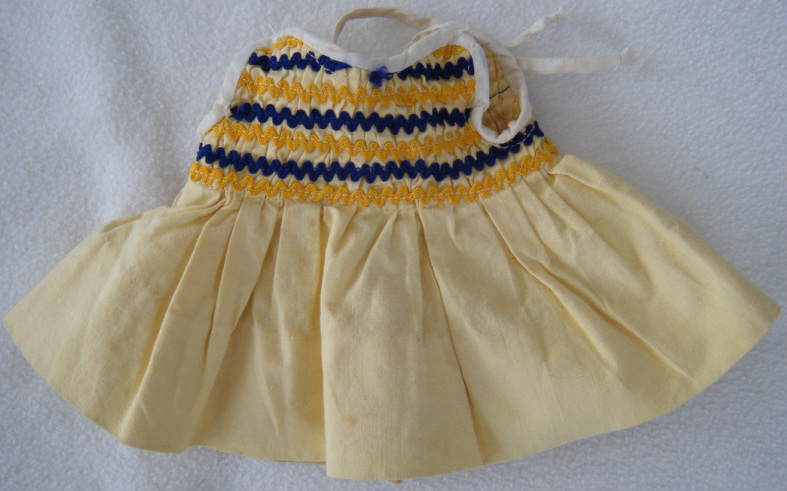 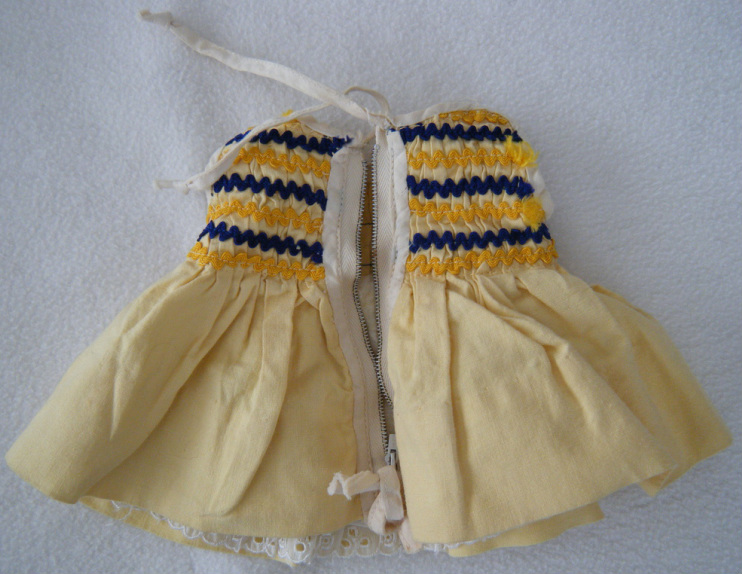 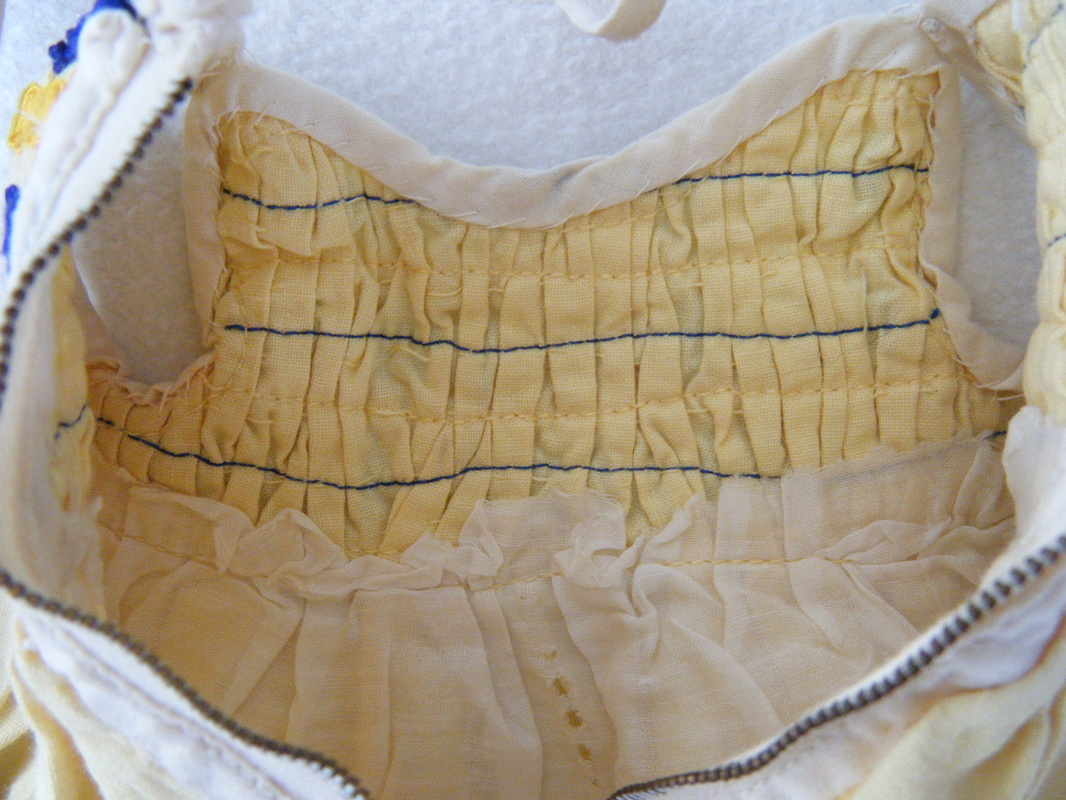 Here is a better view of the zipper and smocking inside the dress. 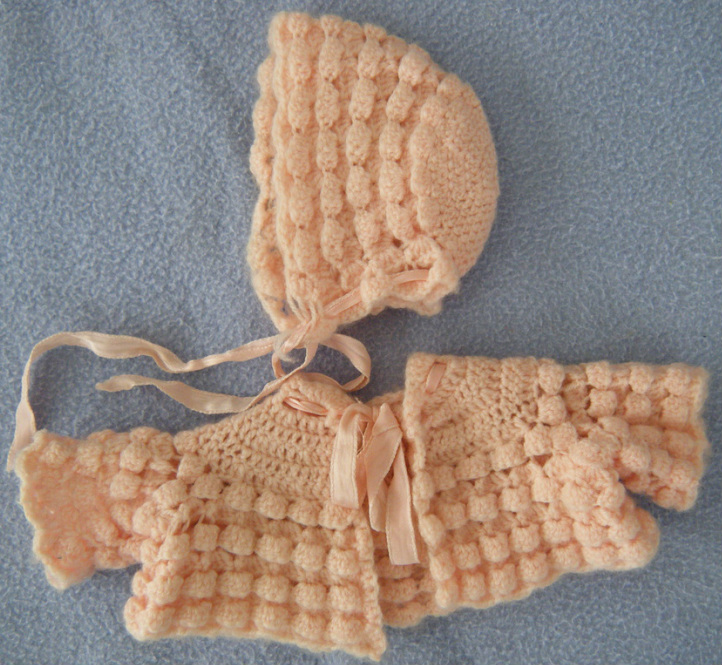 One of my sister's most prized possessions is an outfit crocheted by our paternal grandmother. This outfit was created to match the one my grandmother crocheted for our second sister. 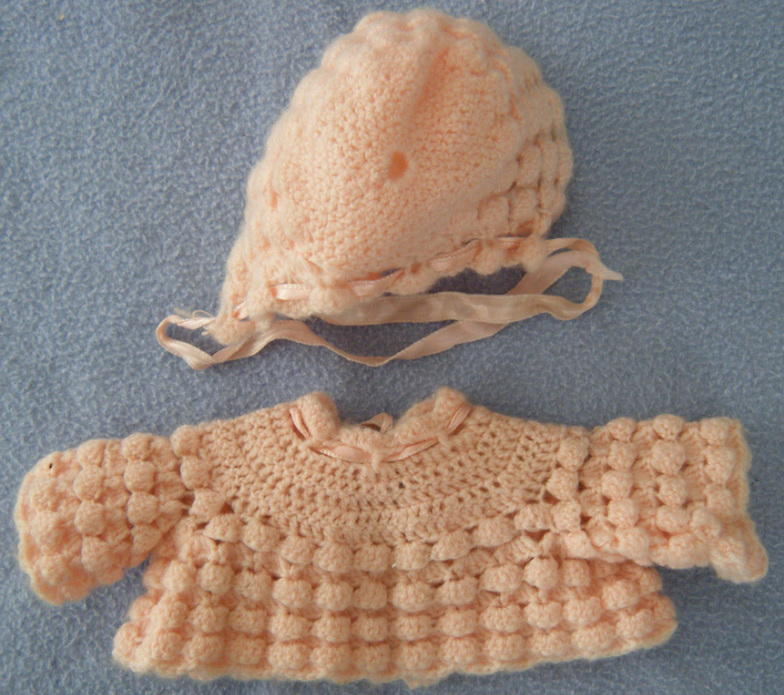 Back of outfit crocheted by my grandmother on my father's side.