My siblings and I are fortunate that our mother made stuffed animals for us when we were young - it made the toys extra special.  She used red heeled socks to make Humpty Dumptys, clowns, and my personal favorite - sock monkeys.  She used written instructions to make the clowns and monkeys, but I believe the Humpty Dumptys are her own design - possibly made from pieces leftover from cutting out clowns and monkeys.  The Humptys were shaped like thick horse shoes with spindly arms about half way between the top of the head and the bottom of the feet.  We would wind up the Humptys' by their arms and then spin them like Yop-yops.  I'm pretty sure my mother never envisioned her creations being used in that undignified manner. The clowns were used more for display than play, but my sock monkey (Kee-kee) was my best buddy - much like the relationship between Christopher Robin and Winnie-the-Pooh.  The monkeys had long arms, legs, and best of all - a long thin tail.  This marvelous set of appendages allowed the monkey to be wrapped around lots of different objects or twirled around like a throwing hammer.  The monkey's body was soft and conducive to becoming an impromptu pillow.  The tail was the perfect diameter for small hands to clasp while sucking a thumb.  Drooling and thumb-sucking made the tails sodden.  My older siblings claim that I used to try to stick the wet tail in their ears.  A well worn monkey developed its own comforting "aroma". I played with my sock monkey so much that it wore out and my sister gave me her monkey as a replacement.  My original monkey, and its replacement, didn't survive the ravages of play and time.  One Christmas, when I was in college, my mother surprised me with a replacement that she dubbed "Son of Kee-kee".  In the following years I received "Grandpa Kee-kee" and "Grandson of Kee-kee".

When I got married and started having children of my own, I made a sock monkey for each child.  My oldest son, named his "Apey" (pronounced "A Pea") because I never got around to putting a tail on it.  His very logical preschool explanation for the name was that monkeys have tails and apes do not.  He wore it out taking it on all sorts of adventures.  It would not be unusual to be sitting in the dining room preparing breakfast and look up to see a monkey being lowered down the stairwell on a piece of string to scope out the menu.  On other occasions he would appear in suits of armor artfully constructed from cardboard and tape.  Apey almost caused a tragedy when my son left him leaning against his night light.  The smell of burning monkey alerted us to the situation before things got worse than a scorched sock monkey. Eventually Apey took to routinely wearing one of my son's first outfits - a red and gray striped onesie.  Apey, after many repairs, has retired to one of my son's boxes of stored artifacts.  Hopefully, one day my son will open the box and be reunited with his old friend and together they will relive the memories that they shared.

My daughter also received a home-made sock monkey so that she could play with her brother.  She spent a great deal of time picking out the button eyes.  She chose eyes that were shaped like flowers.  She decided to name her sock monkey "Sister Apey".  Sister Apey was prone to wearing my daughter's outgrown yellow dress but also dressed up in cardboard armor to go on adventures.

My youngest son participated in the construction of his monkey but lost interest in it before it was even finished.  It quickly took up residence in his tub of unused stuffed animals.  He is definitely a member of the digital generation.  He has always connected with characters in video games and loves to construct his own avatars to take on virtual adventures. 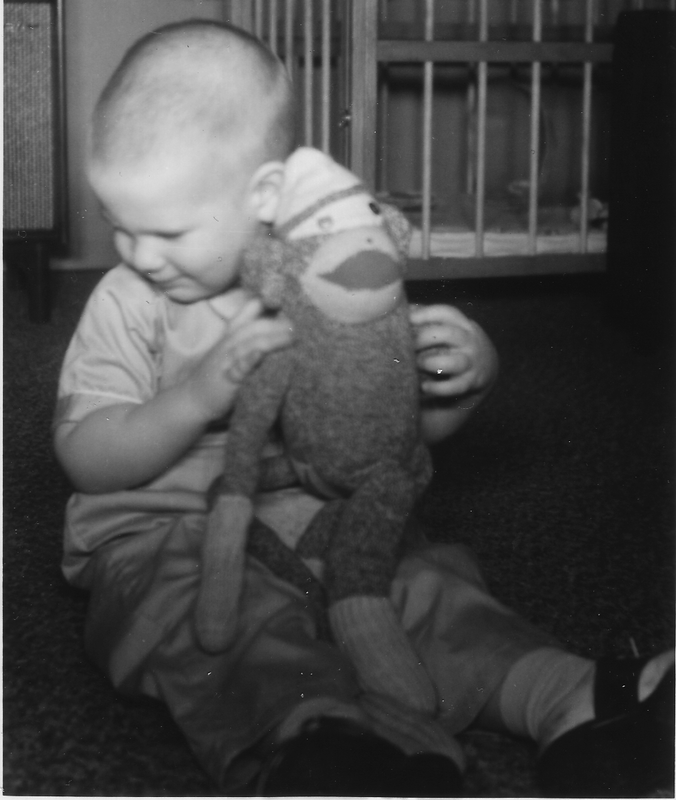 Here is a photo of me with Kee-kee at the age of 26 months. My mother's caption says that I carry Keykey everywhere. (Apparently we don't agree on the spelling of the name). 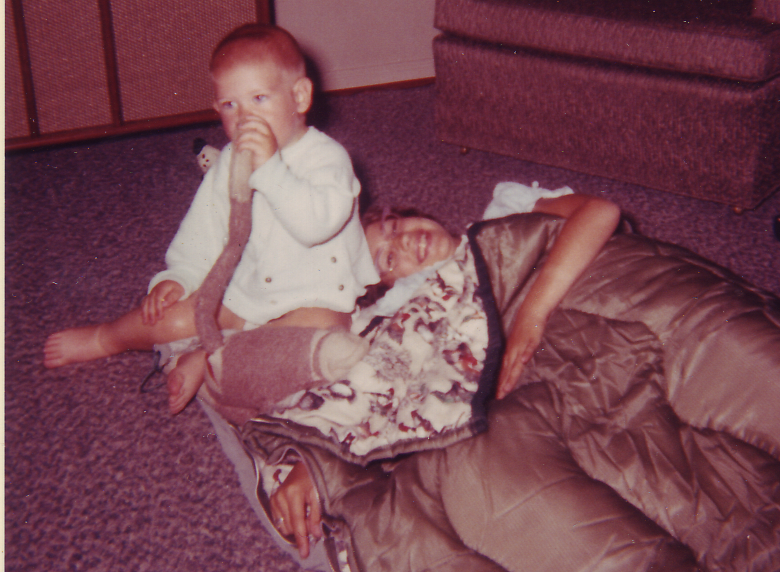 Here I am holding Kee-kee's tail at the age of 1 1/2 years. The other person is my 10 1/2 year old sister testing her new sleeping bag before going off to summer camp. Who would have guessed that 50 years later we would be rescuing dolls and writing tales about sock monkey tails? 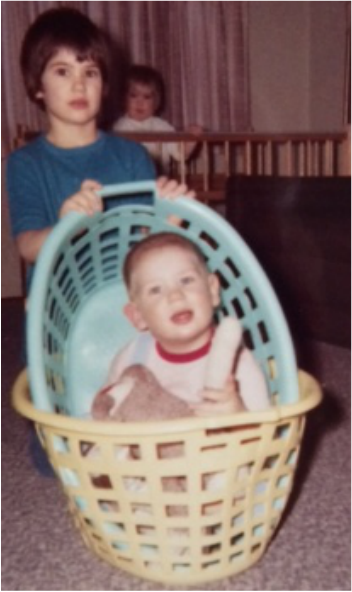 I'm 2 in this photo. My older sister is pushing me around in a buggy we constructed from laundry baskets. This is the sister who donated her sock monkey to me when mine wore out. 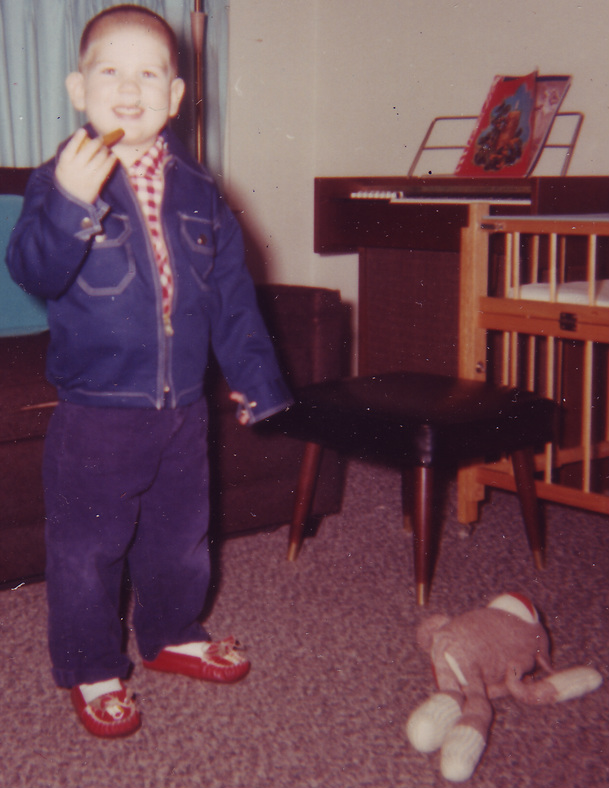 My sock monkey looks on from a relaxed position on the floor as I give its tail a rest and take up sucking on a corn cob pipe that came with my new outfit. That Christmas I was almost 3 years old. The corn cob pipe mysteriously disappeared. I suspect my mother spirited it away before I knocked out a tooth running around the house with a pipe clenched between my teeth. That or we ran out of bubbles... 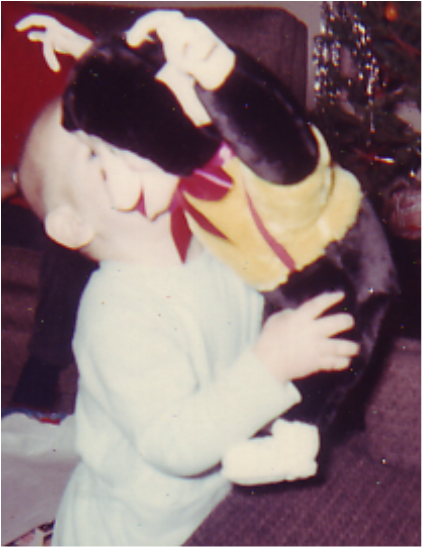 My family tried to capitalize on my fascination with toy monkeys by giving me "Jocko" on the Christmas before my 2nd birthday. He was plush but pretty stiff with the exception of his rubbery hands, feet, and face. I think his seams opened up spilling out the nasty stuffing used in those days. I don't know what became of him - he may have run off to join a circus or perhaps was donated.