Toy guns were rampant in the 1960's.  We had pop-guns, water pistols, dart guns, cap guns, smoking rifles, revolvers, derringers, machine guns, and ray guns.  Even our action figures were packing guns.  Most of my paraphernalia had to do with the American West and is covered in the section on Western Toys.

When I turned 4 years old, I received army gear for my birthday.  I believe the items were from the Remco Monkey Division and included a helmet, belt, grenades, a machine gun, and mess kit with canteen. 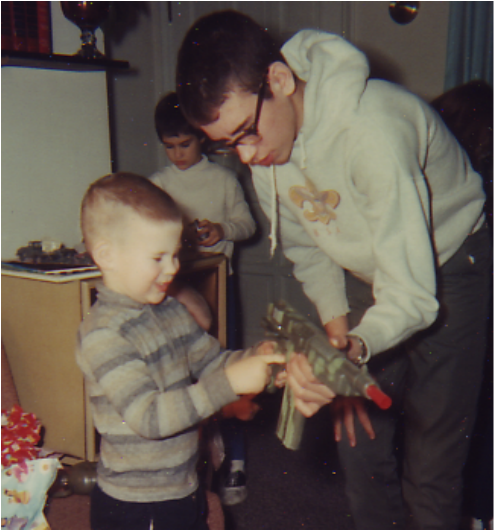 My older brother demonstrating how the machine gun works. I remember it making noise but I don't remember if the red muzzle flashed or something. The canteen is just visible on the cushion of the chair behind me.

By far, my favorite gun is the wooden rubber band gun made by my father.  He made one for each of the children from me on down.  I no longer have it, as it was made from plywood and splintered and cracked over the years.  I don't even have a picture of it.  I've had to make a drawing of what it looked like. 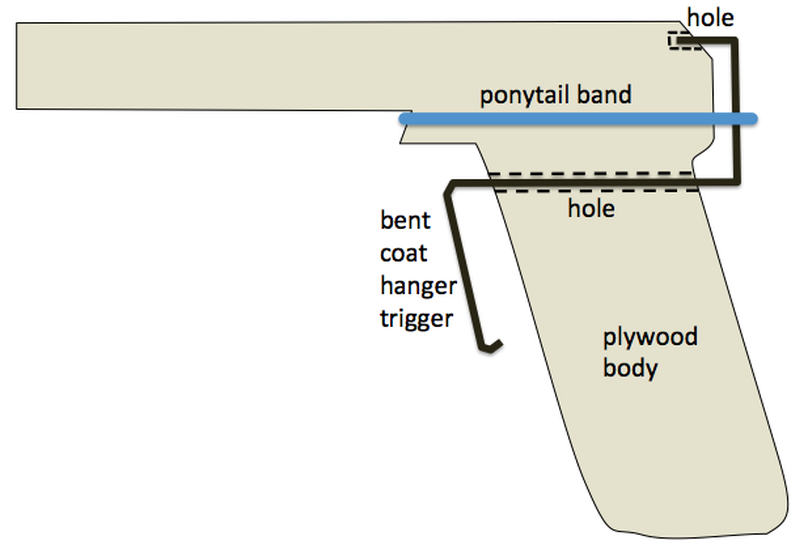 We used our guns for sharp shooting in the basement family room.  We would set up dominoes, paper cutouts, or even small plastic animals all over the room (high and low) and then proceed to fire away until all the targets were taken out.  Watching figurines topple from high shelves was particularly spectacular. We loved to try different stances (standing, kneeling, and prone) as well as quick draws from our holsters.

We used to fight two different types of battles.  One was the stationary battle between forts made from sofa cushions, furniture, and blankets.  You had to be quick to shoot your opponent when he/she popped up to fire. Our ammunition would quickly be exhausted and we would have to dive out of cover to retrieve as many rubber bands as possible without getting picked off.  The second type of battle was the running gunfight.  We would each start with a certain number of rubber bands and pick hiding places in the darkened basement.  Someone would count to ten and then the hunt was on.  You could use stealth to sneak up on your opponents or go screaming into battle like a banshee - gun a blazing.  Scavenging for previously fired ammo in the dark was part of the fun - you had to bluff your opponent into thinking you had a loaded weapon.  Games usually broke up over arguments about who had been hit.  It was the honor system since the battle occurred in the dark.  If things got out of hand our parents would confiscate the guns and hide them for a certain number of days.  We usually found the hiding places in closets, work bench drawers, and on top of cabinets before our punishment was over and begin to play nicely again.  We almost lost the guns for good when a visitor from Arizona got hit in the eye and cried up a storm.  After that incident we took to wearing safety goggles from the workshop.

One of the rituals we engaged in during rubber band gun battles was wearing lucky headgear.  We each had a personal favorite although our choice could vary with our mood.  I favored either a green safari hat, a tri-corner hat I made from a cowboy hat, or a reproduction confederate kepi my older brother bought for me at a civil war re-enactment.  Cowboy hats, coonskin caps, and even a Smokey Bear park ranger flat hat made appearances in the games.