My siblings and I grew up in the era when Westerns like: Gunsmoke, Bonanza, The Rifleman, High Chaparral, Wild Wild West, F Troop, The Big Valley, Dusty's Trail, Kung Fu, Alias Smith and Jones, Rawhide, Here Comes the Bride, and Wagon Train ruled the airwaves.  To the confusion of everyone, Fess Parker played both Daniel Boone and Davy Crockett.  On vacation, my father gathered us around the fireplace and read us the beautifully written and illustrated books by Holling C. Holling: "Paddle to the Sea", "Tree in the Trail", "The Book of Indians", and "The Book of Cowboys". It is a given that we had toys and playtime based on the American frontier. 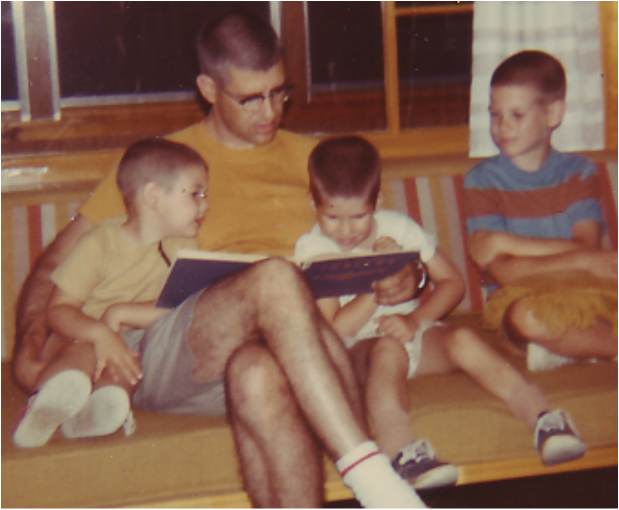 My father reading Holling C. Holling's "Book of Indians" to the 3 middle boys while we were on vacation. I'm the one in the blue and brown shirt. I'm 7 1/2 years old. 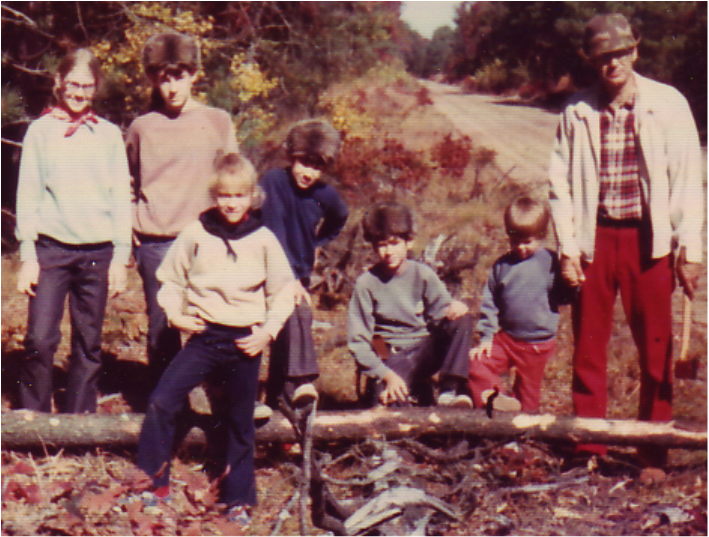 Portrait of a frontier family in October of 1975. My father took the younger family members out to find firewood and gather fallen pines to create a rustic log fence for our vacation cottage. I'm the tallest of the three boys wearing faux "coonskin" caps. The fake skins were still hot and itchy. At least they didn't smell (much).

I can't remember not having Western toys of some sort.  I think all of my siblings had cowboy hats at one time or another.  Some of us had Indian headbands, others red bandanas, and others Sheriff badges. Holsters and hand guns got passed down from sibling to sibling.  A small, fringed, leather vest was only passed on reluctantly after it would get too tight on a growing body.

We would run around the backyard playing cowboys and Indians.  My parents put up a 6 foot privacy fence around much of our backyard - it coincidentally looked a lot like a Western stockade.  Our tree house served as a lookout tower and our tangle bar set (combined with picnic table benches, saw horses, saw blanket, and jump ropes) turned into a conestoga wagon.  The playhouse became the local jail.  The narrow space between the garage and the fence served as a canyon passage or place to stage an ambush. Jump ropes became lariats and sand toys (like an old coffee pot) became cooking gear.  We had a spring horse that we used both indoors and outdoors and allowed the younger sibs to be scouts or pony express riders. 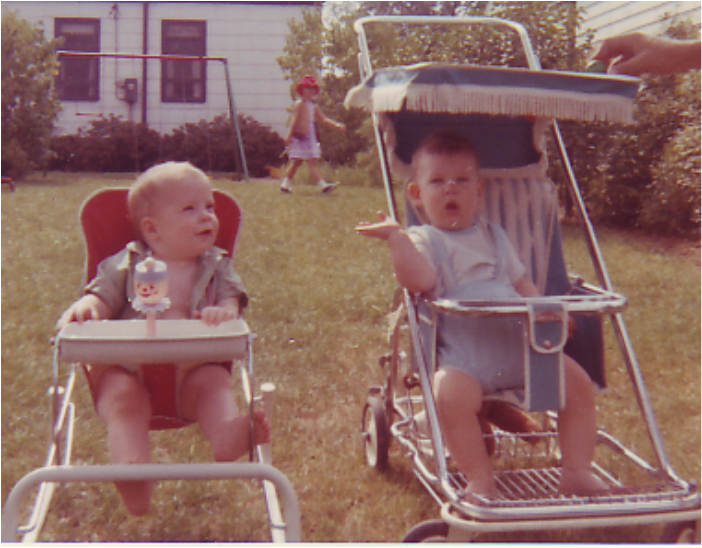 I'm the 6 month old in the "Surrey with the Fringe on Top" explaining the finer points of how to play Cowboys and Indians to my slightly older cousin in the red jump seat. My sister is in the background wearing the coveted leather vest with dark fringes. She is also wearing a red cowboy hat and toting a six shooter. Dresses had yet to be replaced by blue jeans. 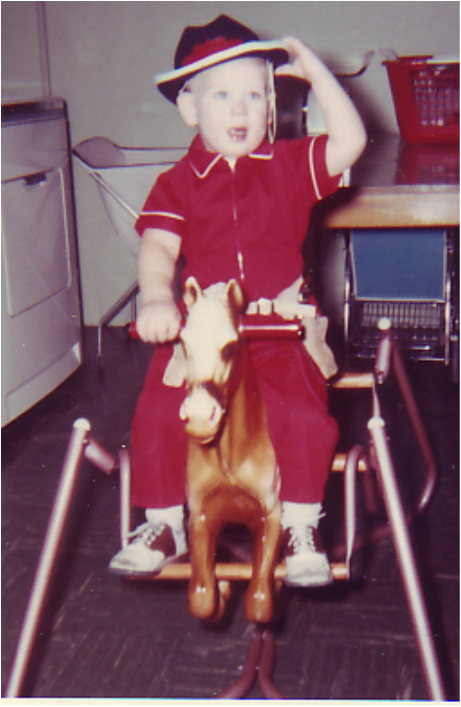 My younger sister and I received this spring style rocking horse as a Christmas gift just before I turned 2 years old. We named him "Charlie". I received my first cowboy hat from my siblings and my first matched pair of six guns and holsters from Santa Claus. We won't mention the saddle shoes. Charlie was a mean-spirited bronco that threw many a rider and pinched many a finger in his springs. My bottom hurts just thinking about riding him. He was eventually put out to pasture. 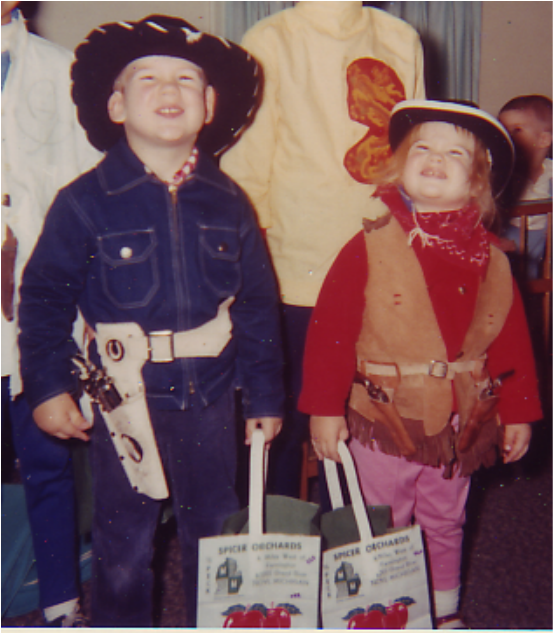 Here I am at 3 3/4 years old on Halloween. My younger sister and I got to go out dressed as Cowboys. My sister is wearing my old hat, a red bandana, and "the Vest". My little six shooters have been replaced by a much larger revolver. I think my gun and holster were part of a "Lone Ranger" set. Personally, I think the apple orchard sacks are not in keeping with our tough cowboy personas. My younger brother is in the play pen in the background. Little does he know that he will be forced to go trick-or-treating as Mama Bear when we go out thematically dressed as Goldilocks and the 3 Bears at a future Halloween.

Wagons of the Old West

I remember learning model building from my father.  We built a Craftmaster's "Wagons of the Old West" stage coach, buckboard, and water wagon together. My older brother built a Conestoga Wagon pulled by a yoke of oxen.  My brothers and I always wanted to use these models in our western games, but they were kept as display pieces. My mother still has the stage coach and buckboard up in her attic.  I pulled them out to take some photos.  Even though they were not used for play they have received lots of damage over the years from being vacuumed/dusted, or knocked off of shelves onto the floor by rambunctious cats.

Marx's Johnny West series of action figures entered our lives at Christmas in 1968.  My siblings and I received Chief Cherokee, Johnny West, Jamie West, Janice West, and Josie West along with horses (2 Thunderbolts and 3 smaller horses I don't remember the names of).  The fact that we each had a toy from a themed set, as well as countless accessories, meant that creative play was sure to happen. 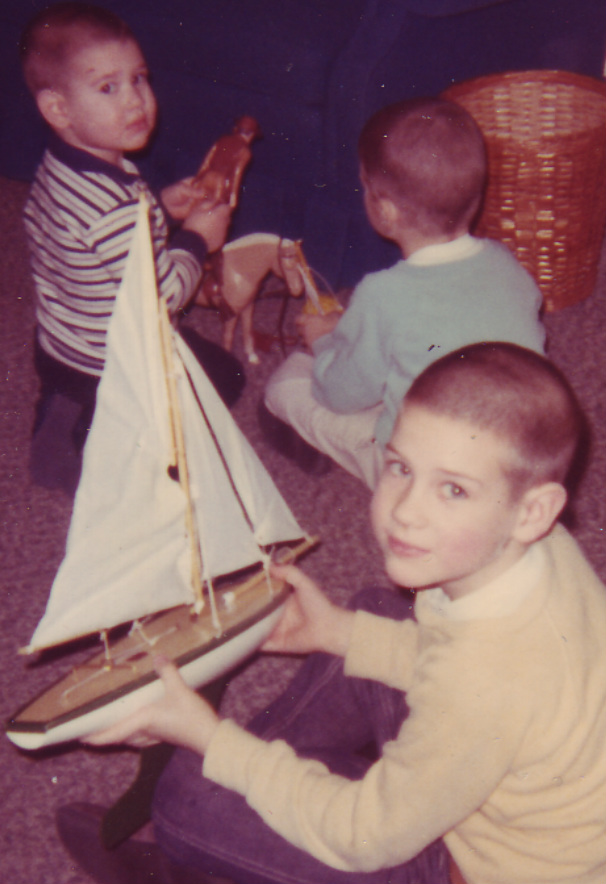 In 1968 (I was almost 7 years old) I received Chief Cherokee and a horse for Christmas. I don't have an actual photo of me with Chief Cherokee - this is closest I could come. I am in the foreground holding my brand new Northern Star sail boat. My younger brother has his back to me and is holding his much smaller yellow sailboat. His could sail in the bathtub but mine required a lake. My even younger brother in the upper left is playing with his new Jamie West and horse. 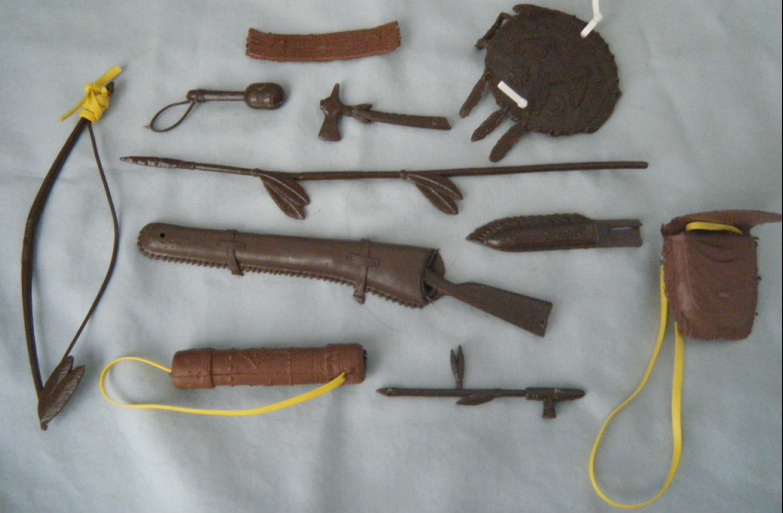 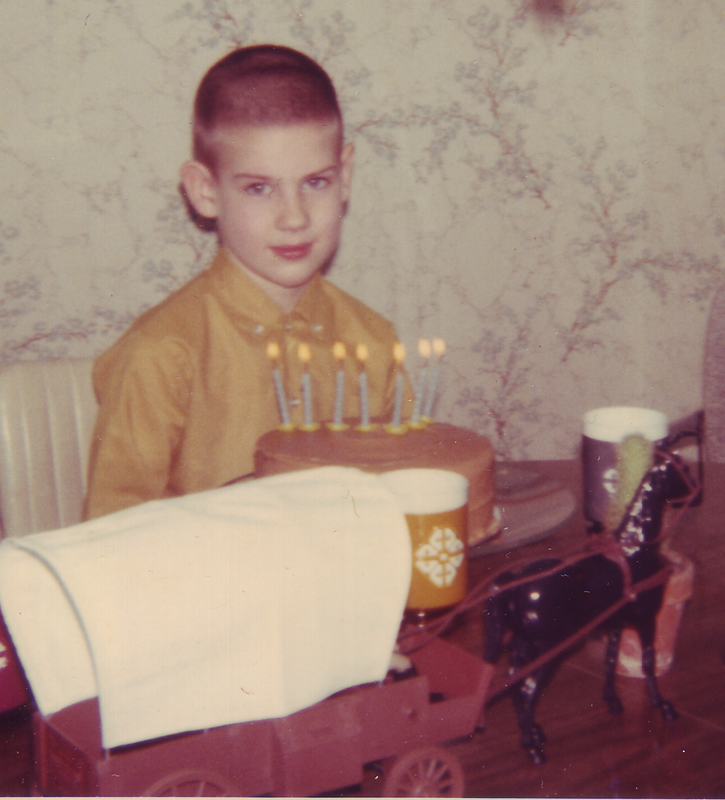 For my 7th birthday my mother and father served me "Chuck Wagon Dinner" (aka hot dogs and beans). Technically, the dinner props were a little too small for the West dolls - but they were put into use in our game play anyway.