The origins of Creature are mysterious and best not considered...  Actually, Creature is a handmade stuffed toy that my one year younger sister let me play with when we had adventures during our afternoon rest periods when we were quite young.  Now that we are older, we realize that the rest periods were not for us, but rather for our mother who needed to rest after dressing, feeding, and cleaning little children.  Anyway, we would go down into our basement (a nice finished basement not a creepy dungeon-like basement) and build all sorts of pretend structures and vehicles using a card table, a ratty old white blanket (that was supposed to be covering our father's table saw), sofa cushions, and blocks.  We might even strap on our holsters, tie on bandanas, and don cowboy hats or other dress-up paraphernalia.  We would imagine a storyline that involved us and our companions - Creature and Whitey.  Whitey is a teddy bear that had soft and lustrous white fur and golden brown eyes.  Whitey, operated by my sister, would generally be the hero of our stories and Creature (operated by yours truly) was either a side-kick or an inept and goofy villain.  The four of us had a bond, we were a team.

Boys in the 1960's didn't play with dolls or stuffed animals but Creature wasn't really a doll, he was more like a bizarre, indescribable thing - so he was okay to play with.  Oddly, Creature, didn't have functional arms or legs - he was essentially a big cylindrical head with huge eyes and a lop-sided grin.  He could be bent and compressed, as well as thrown around, during rough and tumble adventures.

Whitey was cool because he had sort of a secret identity.  He could take on imaginary bad guys during rest time or he could put on some doll clothes and hang out with the dolls when the neighborhood girls would get together with their doll buggies and play house.

My sister has kept Whitey and Creature.  They are now retired from their adventurous lives - a little worse for the wear.  Creature's felt is stretched thin and his friar's haircut is fading.  Whitey isn't so white, balding, and too frail to travel.  He used to go on vacation with us to the lake.  We were permitted to take one toy apiece when we went on vacation.  We smuggled other toys (like Creature) in our pillow cases.  Our parents never let on that they knew we were lugging around 40 lb pillows of contraband when we got into the car before the trip.  Whitey even came to the lake well into our adult lives as a sort of good luck charm and honorary family member.

A few year ago, my sister surprised me by giving me a Creature of my very own (as well as miniatures Creatures for my two sons).  She crocheted them and duplicated the facial expression of the original.  My sons don't understand the magic that is Creature so I keep all three of the grinning toys in my home office.  They are not just stuffed with fiber fill but also with lots of happy memories. 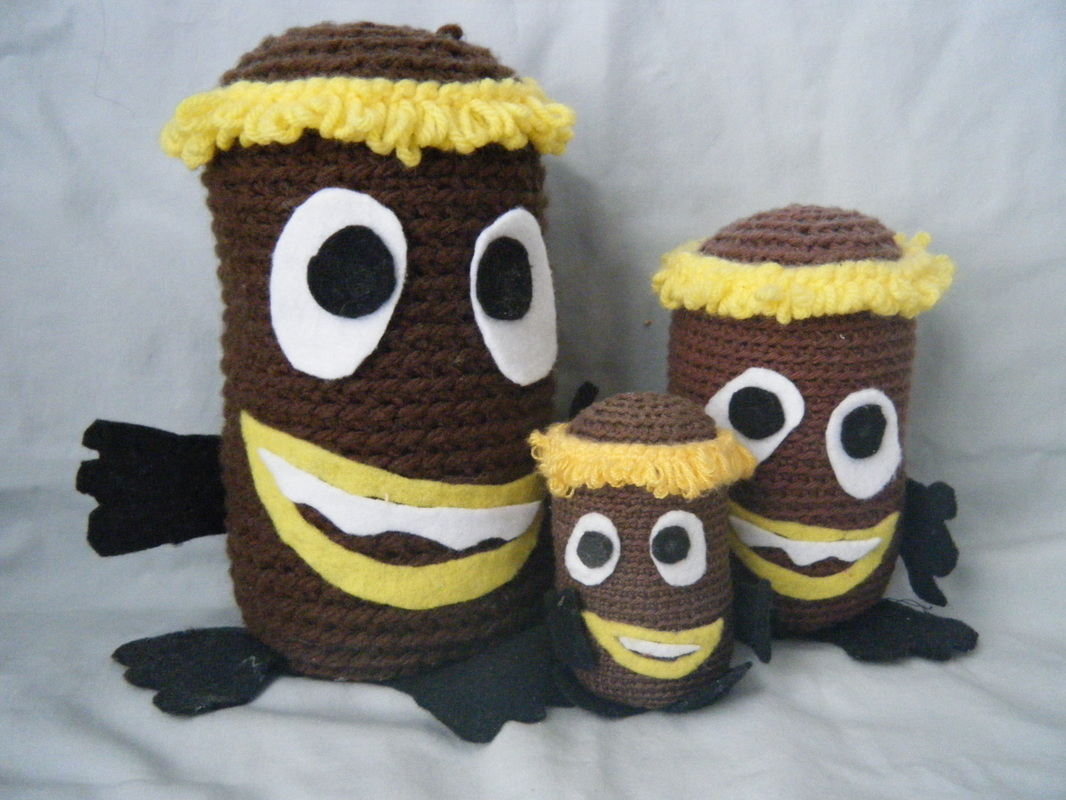 A trio of reproduction Creatures made by my younger sister. I am going to ask her to provide photos of the original Creature as well as Whitey.