The original Liddle Kiddles were produced by Mattel from 1966-1968.  For Christmas 1966 (I was almost 5 according to the family photo in which I am receiving my Kiddle), my parents gave several of us Liddle Kiddles.  My older sister received Babe Biddle (and her ultra-cool sports car), I received Bunsen Burnie (with a fire truck), my younger sister received Calamity Jiddle (with a rocking horse), and my younger brother received Biff Boodle (with a wagon).  All came with some sort of head gear as well as a hair brush and comb.  They all wore shoes except for Biff.  My brother and I used to love to invert Biff's cap because it was so flexible.  We also used to love putting the soft rubber shoes on our fingertips - why, I have no idea.  We also loved their plasticy smell - it would remind you of Christmas morning.  The Kiddles were posable because they had wires inside of them.  Unfortunately, the more you played with them the more the wires poked out of their hands and feet causing numerous finger pricks to their owners.  Once this happened, my father would march the offending Kiddle down to his workbench in the basement, take out his slim-nosed pliers, and extract the wire while we would watch, cringing in horror.  After this grizzly procedure, the Kiddle was less fun to play with because it could no longer strike a pose.  My father did wireless long before it became popular.

Usually the boys were not allowed up in the girls' bedroom on the second floor without special permission.  Playing Kiddles was like getting an engraved invitation.  The girls were in possession of a two-story doll house that we all used when playing Kiddles.  We boys usually lost interest in well-mannered play fairly quickly and would either have our dolls do reckless boy things (like leap over tall doll houses in a single bound) or we would start jumping or rolling about on the bedroom floor (shaking the first floor ceiling).  Either the sisters, or the parents, or both, would then evict us from the second floor.

At some point in my pre-teen or early teen years, I must have thrown out Bunsen Burnie, while doing a routine purge of broken or outgrown toys.  When I confessed this unspeakable act to my sisters (in my forties...) they were both appalled and saddened.  For my birthday, they surprised me with a replacement Bunsen Burnie they had located online.  Amazingly enough, he still has his fire truck and wires!  I had to quickly hide him from my father who started to get that surgical gleam in his eyes.  Bunsen now resides in his own display case in my home office (on the second floor) - a fun reminder of my distant past.

I will have to check with my sisters to see if they would like to add memories (and photos) of their Kiddles.  I imagine their memories exactly match my own... 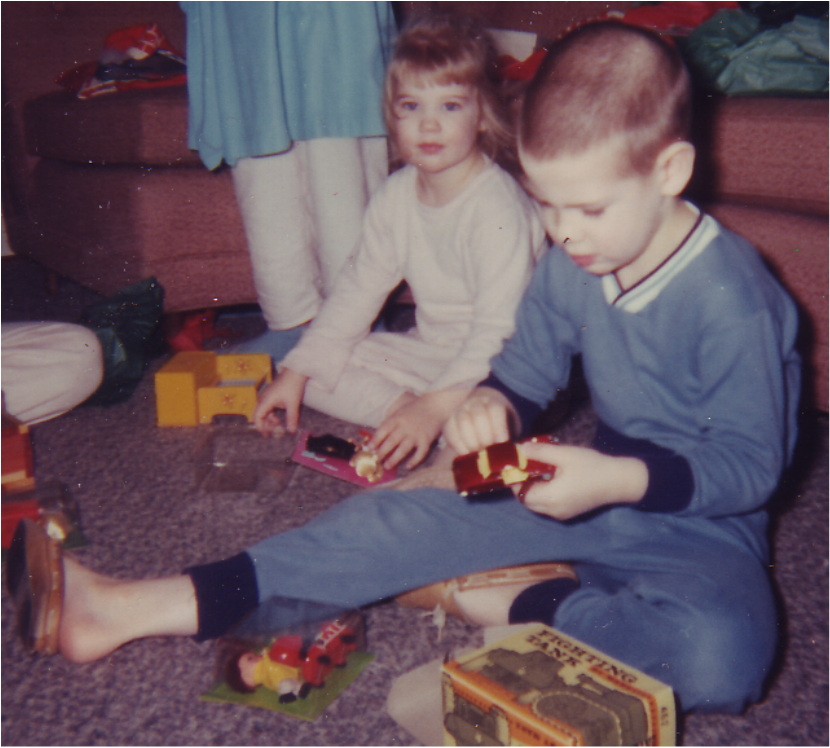 Bunsen is still in his package in the foreground as I am opening Christmas presents in 1966. I used to pretend that Bunsen drove the sports car I am holding in my hand since he had to keep up with my older sister's Babe Biddle. My younger sister is taking Calamity Jiddle out of her package in the background.